About Our Team, Partners and Sponsors

We welcome feedback of any kind. Please feel free to get in touch with us via email at studio-info@andrew.cmu.edu or (on Twitter) @moon_drawings. 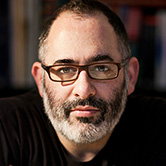 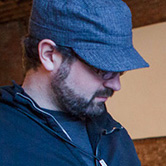 Moon Drawings was created by Golan Levin and David Newbury, as a component of the Moon Arts Project housed within the Frank-Ratchye STUDIO for Creative Inquiry at Carnegie Mellon University (CMU). Our ride to the Moon is made possible by our amazing partners in the CMU Planetary Robotics Team and Astrobotic Technology. Essential conceptual and/or technical contributions to the Moon Drawings project were made by Lowry Burgess, Pablo Garcia, Ian Ingram, and Maya Kreidieh.

Golan Levin (@golan) is an artist and engineer interested in exploring new intersections of machine code and visual culture. Through performances, digital artifacts, and virtual environments, often created with a variety of collaborators, Levin applies creative twists to digital technologies that highlight our relationship with machines, make visible our ways of interacting with each other, and explore the intersection of non-verbal communication and interactivity. At Carnegie Mellon University, Levin is presently an Associate Professor of Electronic Art, with courtesy appointments in Computer Science, Entertainment Technology, and Design. Since 2009 he has also served as Director of the Frank-Ratchye STUDIO for Creative Inquiry, a laboratory for atypical and anti-disciplinary research across the arts, science, technology and culture.

David Newbury (@workergnome) is a creative developer working at the intersections between hardware, animation and data. He explores methods of using technology to provide novel experiences without obvious technological mediation. He has spent the past 15 years working on interactive projects for major brands, including Samsung, Google, and Oreo, as well as working with museums, universities and public broadcasting. His work has received national attention, including Emmy awards and coverage in Wired, Vice, and other publications. He runs a small design practice, Workergnome Studios, focusing on unusual development projects, and he gives workshops on using technology for artistic practices.

Moon Drawings is an initiative of the Moon Arts Group, a collaborative research team initiated by distinguished space artist, Professor Lowry Burgess to bring the footprint of the arts to the Moon. Under Burgess's direction, the Moon Arts Group is creating the Moon Arts Ark, a "gift for the Moon" containing elements representing all of the arts, humanities, and sciences. The Moon Arts Group is comprised of approximately thirty members, including Carnegie Mellon faculty, students and alumni working alongside independent artists and professionals.

The Frank-Ratchye STUDIO for Creative Inquiry

Moon Drawings and the Moon Arts Group are administrated by the Frank-Ratchye STUDIO for Creative Inquiry, a flexible laboratory dedicated to the support of atypical, anti-disciplinary and inter-institutional research at the intersection of the arts, science, technology and culture. Founded in 1989 within the College of Fine Arts at Carnegie Mellon University, the STUDIO serves as a locus for hybrid enterprises on the CMU campus, the Pittsburgh region, and internationally. The STUDIO's current emphasis on new media arts builds on more than two decades of experience hosting interdisciplinary artists in an environment enriched by world-class science and engineering departments. Through our programs, the STUDIO provides opportunities for learning, dialogue and research that lead to innovative breakthroughs, new policies, and the redefinition of the role of artists in a quickly changing world.

Transport of the Moon Drawings disc to the Moon is made possible by generous in-kind support from the CMU Planetary Robotics Team, a group of students and researchers organized within Carnegie Mellon's Robotics Institute, and led by Professor William "Red" Whittaker. Dedicated to the development of new exploration technologies, the team's flagship project is a Moon rover known as Andy, a four-wheeled robot designed to scramble up steep slopes and survive the temperature swings and high radiation encountered in the Moon's pits, caves and polar ice. Andy is Carnegie Mellon's contribution to an effort led by Pittsburgh's Astrobotic Technology to land a robot on the Moon and win the $30 million Google Lunar XPrize.

The Moon Drawings project is coordinated through the Frank-Ratchye STUDIO for Creative Inquiry at Carnegie Mellon University, and made possible by generous in-kind and/or financial support from Astrobotic Technology Inc., the Robotics Institute at CMU, the CMU School of Art, the CMU School of Design, the CMU College of Fine Arts, the CMU Science and Humanities Scholars Program, Carnegie Museums of Pittsburgh, National Space Society, the National Aeronautics and Space Administration (NASA), Arnano, 3rd Dimension Industrial 3D Printing, the International Gemological Institute, the Frank-Ratchye Fund for Art @ the Frontier, and an anonymous donor.